corona-tine dispatch 3: why I bake

Congrats to everyone who made it through another Monday of working from home without eating all the cookie dough in the fridge!

While I may have caved, there a still a few nuggets of store-brand cookie dough left (they were out of the good stuff). I wouldn't normally go for pre-made, but (a) I want to save my flour for bread, and (b) I can't trust myself with a bag of chocolate chips. I've been making bread every weekend, give or take, for the past few months, and I like to have a couple pounds of flour around - but it seems a few other people have come around to this idea during quarantine, so flour's in short supply. (As are chicks.)

I've seen a lot of tweets and articles about stress baking during quarantine. People are doing it because they want comforting sweets, or to keep their kids busy by baking together, or just because their local store was out of bread. (Or they're French bakers who have a need to fulfill for the people!) Between cake baking and supply hoarding, the U.S. egg supply chain might be suffering, and stores' flour shelves are often empty. There have also been a slew of articles about baking as meditation, procrastination, distraction... it seems like people are using baking for whatever purpose they need it to fill.

I started baking naturally-leavened bread consistently around the start of my fourth year in my Ph.D. program, in the fall when my partner was gone for six (or eight? I can't remember) weeks for fieldwork. I was impatient and only let my starter grow for a week and a half before giving it a whirl; my first attempts were pale and flat as pancakes, but still approximated bread. Audrey, my carb-loving cat, thought they were just fine. 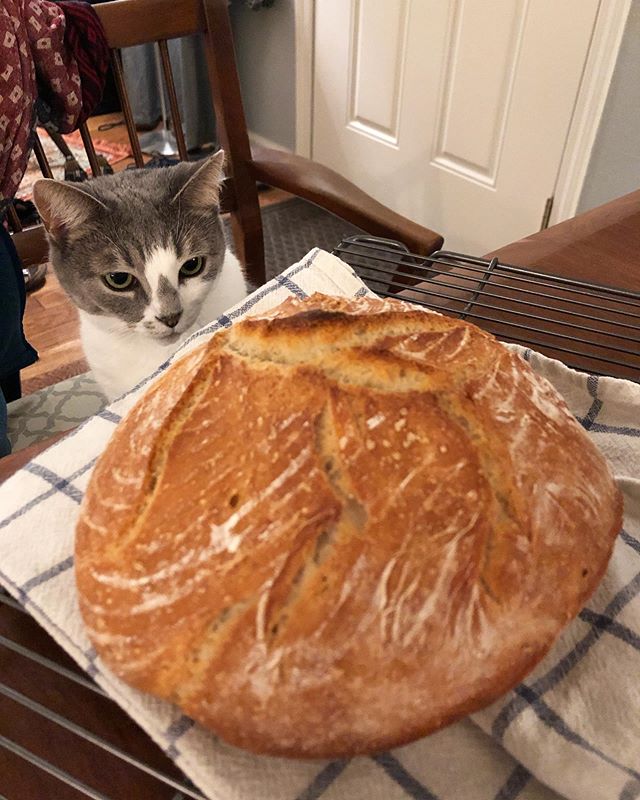 I kept working at it, following the instructions from a well-known local bakery (good bread, overrated and overpriced sandwiches) and slowly learned how to judge starter and levain and development. I received a Dutch oven* for my birthday - game changer. I invested in a thermometer (to track dough temperatures while it's fermenting/rising), a scoring razor, and hard plastic bins for fermenting. My results started to get better, and more consistent. I had originally set out with the ambitious goal of a perfectly tangy sourdough, but I quickly realized that there were other factors to get right first.

So for the past several months, I've just been focusing on shape and structure. Another fine birthday gift was a literal baking textbook from my labmate (thanks!) that's a great reference for the chemistry behind baking, complete with experiments you can do at home to see how different elements affect different characteristics of breads. I switched to following advice from a famous bakery in San Francisco and started getting better structures, crispier crusts, taller ears. My breads aren't sour, but they're no longer pancakes. And I know giant, open structures for the "artisan" look are trendy, but I like my bread a little more solid so I can pile as much olive oil/avocado/cheese on there as possible. I like my crust as crispy possible and nearly impossible to cut through. (Maybe my next investment needs to be a better bread knife.)

My parents asked me last night how long it takes to make the bread, start to finish. This past weekend, I made my levain Friday night, made and fermented the dough Saturday afternoon-evening, and did an overnight proof in the fridge. The second loaf came out of the oven around 11 a.m. Monday morning.

I realized that, on paper, that sounds like a very long time just for some bread. And there are shortcuts you can take; in a pinch, I've used this Dutch oven recipe for a quick crusty round in a few hours instead of days. But the time isn't a concern for me; in fact, it's part of the appeal of baking bread. People have been talking about baking as a way to while away the hours in quarantine, as well as a way to reduce anxiety, but you don't have to be stressed or anxious to enjoy the process. As a grad student, or really just a human alive in this day and age, I spend a lot of my time in front of a computer. My work products are data and papers and figures; unless I'm in the field or lab, there's nothing tangible or solid about what I do. And in the context of coronavirus (as well as the end of my fourth year in grad school), more than ever, I question why I do what I do and what benefit it serves on a near-daily basis. On a good day, I tell myself that curiosity-driven science is a necessary part of advancing society; that if our inherent need to explore and learn dies off, progress would grind to a halt. Some of our best discoveries were accidental. (If I discover the next penicillin because I left some wet soil in a closed bag for eight months, can I get my degree early?) But on a bad day, I look at all the data I've collected over the past few years, open my manuscripts, and just think, "Why? Who cares?" For a lot of my work, I know the answer to the latter is, "A very small group of scientists and precious few others." (Which is why being able to communicate 'why is this interesting?' to non-experts is important!)

Anyway, the point is, I spend most of my time doing invisible work. Baking is one way I can create something physical, something obviously, directly useful: I can eat it, powering my

brain to do research and then watch cartoons. It's a skill that I can practice every week, see and measure my progress, and improve. (I still struggle to handle doughs around 80% hydration.) It would make me a more valuable member of society after late-

stage capitalism collapses and we resort to hunter-gather type villages. (See also: "how to grow vegetables" trend on google.)

Personally, I don't think of baking as meditation; I take too many notes and get too excited watching the bubbles develop for it to be a particularly zen activity. But it is something concrete to care about and invest time in outside of work, and - when we're not in social isolation mode - is also a fun thing to do with my friends in our tiny, tiny kitchen. I love the dramatic reveal of removing the Dutch oven lid, seeing how the ear is forming, hearing the crackle as it cools after you take the loaf out of the oven**. Cutting it open to see the internal structure, dipping it in the "splurge" olive oil, and eating half the loaf fresh out of the oven makes the time spent more than worth it. (Doing the flour-encrusted dishes is my least favorite part.)

So I'm a strong proponent of baking even when we're not in quarantine. I like it for the same reason I spent hours last week sanding and refinishing our extremely not fancy Ikea deck furniture: it's a hands-on, useful skill that anchors me, in some small way, to my personal life beyond work. It helps me feel productive even if all I managed to do for work was send an email and scroll through academic twitter to see who else isn't getting any work done. And the cynical, jaded millenial in me says it's a way to spend your hours that isn't plopped in front of Netflix, willing yourself to find meaning in anything you do and trying to ward off existential crises. (We're a fun bunch.)

I'll still probably crank up the baking while we're in social isolation mode. I have a couche now, so baguettes are next on my list, but I also want to order some rye flour and tackle that, as well as a chocolate babka, and of course more cornbread (because I can eat an entire pan in one night, alone, standing over the counter, with no regrets).

Because this is quarantine. This is life with coronavirus. We have to be prepared for anything (and what else is there to do?)... so bring on the carbs!

*Know-it-all fun fact: An enameled cast-iron Dutch oven is technically called a French oven, but the name never caught on.

**Bonus fun fact: Google searches for "Never Gonna Give You Up" have spiked since February. This is either because of the enduring spirit of humanity facing a global crisis in which we must all pull together, or because there are a lot of bored people at home. Follow me on twitter for more quality content, by which I mean 11 pm-12:30am angry retweeting.

The graduate student strike was imperfect, but reminds us why unions are important and why they work

For the AWIS magazine: Self-care while working at home in quarantine

Argue against the ICE #StudentBan with both empathy and economics.